For developing a new harvesting feeder solution for soybean farming that lasts longer, damages fewer crops and drastically improves the yield of existing farms, Kampag has been nominated for the Swedish Steel Prize 2019.

The Swedish Steel Prize, which celebrates its 20th anniversary this year, aims to recognize the good engineering, cooperation and steel innovations that lead to a better and more sustainable world. Kampag, from Brazil, is one of the four finalists for this year’s prize, which will be awarded during a ceremony in Stockholm, Sweden on November 14. The award ceremony is part of a three-day event where hundreds of international participants will take part in seminars and a site visit at SSAB.

Kampag is nominated for its High Performance Feeder Modulus, a unique solution for soy axial grain harvesters that allows for increased yields through the gentler handling of the harvested crop.

“In traditional feeders, we noticed that the components responsible for moving the soybeans between the entry of the machine and the axial rotor had a design that would obstruct the natural and continuous flow. They generated interruptions, which would damage the beans. So, we tried to create the new design of the modulus, changing the shape of the blades that are responsible for feeding the machine,” says Kampag Managing Director Vanderlei Kamphorst.

The machine is called “axial”, meaning that the material flow occurs at the axial axle, as it is placed at the main rotor. The new feeder modulus utilizes blades made from the abrasion resistant steel Hardox® 500 with an optimized shape in a spiral-like orientation that cut and collect soybeans, as well as other cultures like rice, maize, wheat and beans, in a continuous flow.

“After beginning to use Hardox® 500, we managed to guarantee a very stable process and good reliability, thereby increasing the durability of the blades compared with the previous solution,” notes Kamphorst. “Additionally, the wear resistance is much higher, so it is easy to see that Hardox made a huge difference for us.”

The High Performance Feeder Modulus means that harvesters can operate two hours longer per day due to the ability to operate in moist conditions. The unique design and use of Hardox® 500 steel means that weight has also been drastically reduced from previous solutions and the result is a reduction in fuel consumption of up to 15 percent when harvesting.

The High Performance Feeder Modulus is also gentler on the crop during harvest, which accounts for an increase in production of usable soybeans by 3 percent.

To put this into perspective, at today’s harvesting levels, the increase attributed to the High Performance Feeder Modulus alone would satisfy Sweden’s entire demand for soybeans for two years.


The Swedish Steel Prize jury’s motivation for selecting Kampag as a finalist for the Swedish Steel Prize 2019 is:
Kampag has managed to increase soybean yields by focusing its harvester design on the gentler handling of the crop. A unique feeding modulus unit shows less damage to the harvested bean and also increases machine availability in conditions with high humidity. Additional productivity and sustainability benefits have been realized when upgrading to high strength and wear resistant steel including, increased service life, reduced weight and more lean production as well as maintenance processes with energy savings. 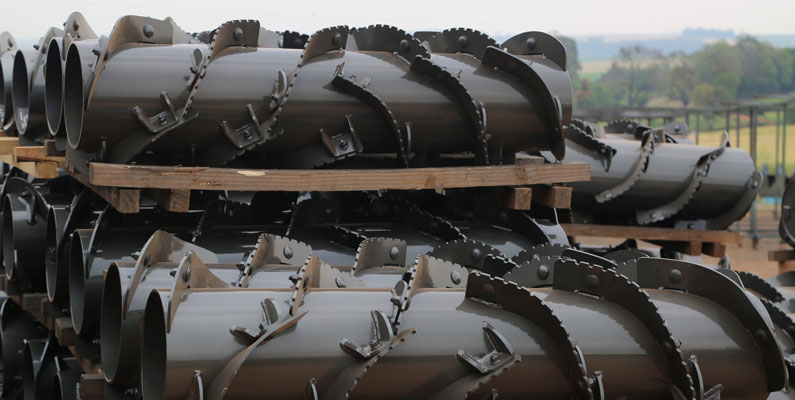